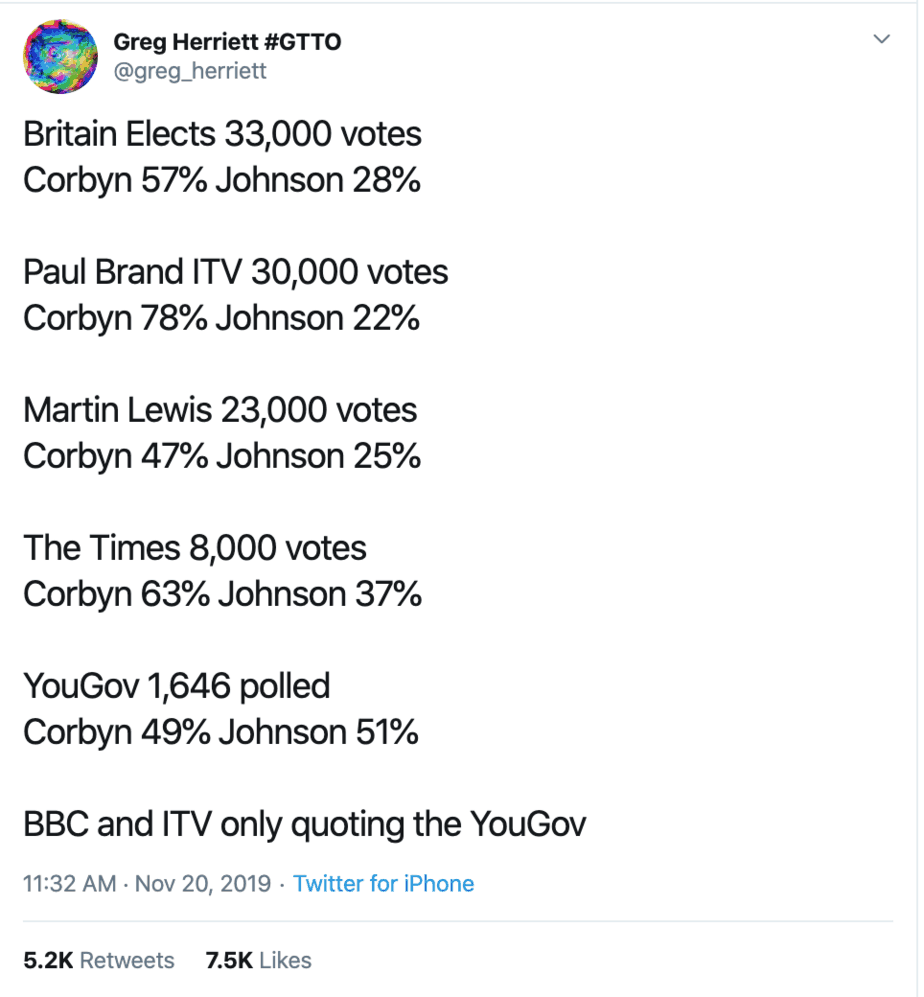 In a previous era, elections as with the rest of political life were given structure by media and political gatekeepers. The news was only what was printed in newspapers or broadcast on TV, and politics was only played by a small class of people known as “politicians”. Elections were defined by a set of events, such as manifesto launches, debates and interviews with leaders on TV.

But in the modern social media environment, this is no longer the case. Today, a suitably compelling Facebook post by literally anyone could reach millions of people – and seize control of the news agenda.

In fact, we’ve already seen this dynamic at work. One of the reasons Theresa May underperformed expectations in 2017 is thought to be the fact the Conservative manifesto did not mention supporting an ivory ban. Don’t worry if you missed this story. For all of the mainstream media coverage of the dementia tax and Brexit, it was the ivory ban – or lack thereof – that proved insanely viral on Facebook.

So despite the elite debate among politicos focusing on Brexit and so on, maybe tomorrow the same thing could happen in the 2019 election? Maybe there is already a post surging about an issue that politicos have never even heard of, that is changing hearts and minds as we speak?

As Buzzfeed reported a couple of days ago, some of the biggest political actors on Facebook at the moment are not news outlets, but hyper-partisan Facebook pages. So maybe it will be something posted on the “WEAR RED” or “Fight 4 Brexit” page, instead of the BBC or The Times that proves pivotal?

As Vladimir Putin will tell you, ultra-viral posts do not even have to be true to resonate.

One very topical example of this is the tweet in the screenshot above, which went viral after this week’s election debate, earning thousands of retweets and favourites on Twitter, and an afterlife as a screenshot shared on Facebook too. The claim is that YouGov’s post-debate poll is somehow less representative than the others listed. And even worse, the mainstream media are ignoring the other polls.

The trouble is that the other polls… aren’t proper polls. The YouGov poll was a proper, scientific poll that had involved YouGov contacting people who watched the debate and asking them for their thoughts. The results were then appropriately weighted to reflect the actual demographics of the country. This is how political polling always works, and is the only way of building an accurate reflection of what the nation really thinks – and yes, it is more than possible to do this with a sample size of just 1600 people.

The other polls are just… bullshit “clicker” polls on Twitter, where someone adds a “poll” to their tweet. In other words, the voters are just whoever happens to see the tweet, and the results are just the raw numbers. They are utterly meaningless as they are unrepresentative. Anyone who has even a basic understanding of how polling works knows this. But… that hasn’t stopped thousands of people from sharing it, and it reaching no-doubt hundreds of thousands, or even millions of eyeballs.

To be clear, this post isn’t the work of Russian bots or a disinformation campaign. It’s just good, old-fashioned bullshit, being shared by real British people who do not know what they are talking about.

So if we’re trying to understand how this might affect the election then we need to grapple with an uncomfortable fact: The disinformation is coming from inside the house… and it could profoundly impact the result on December 12th.