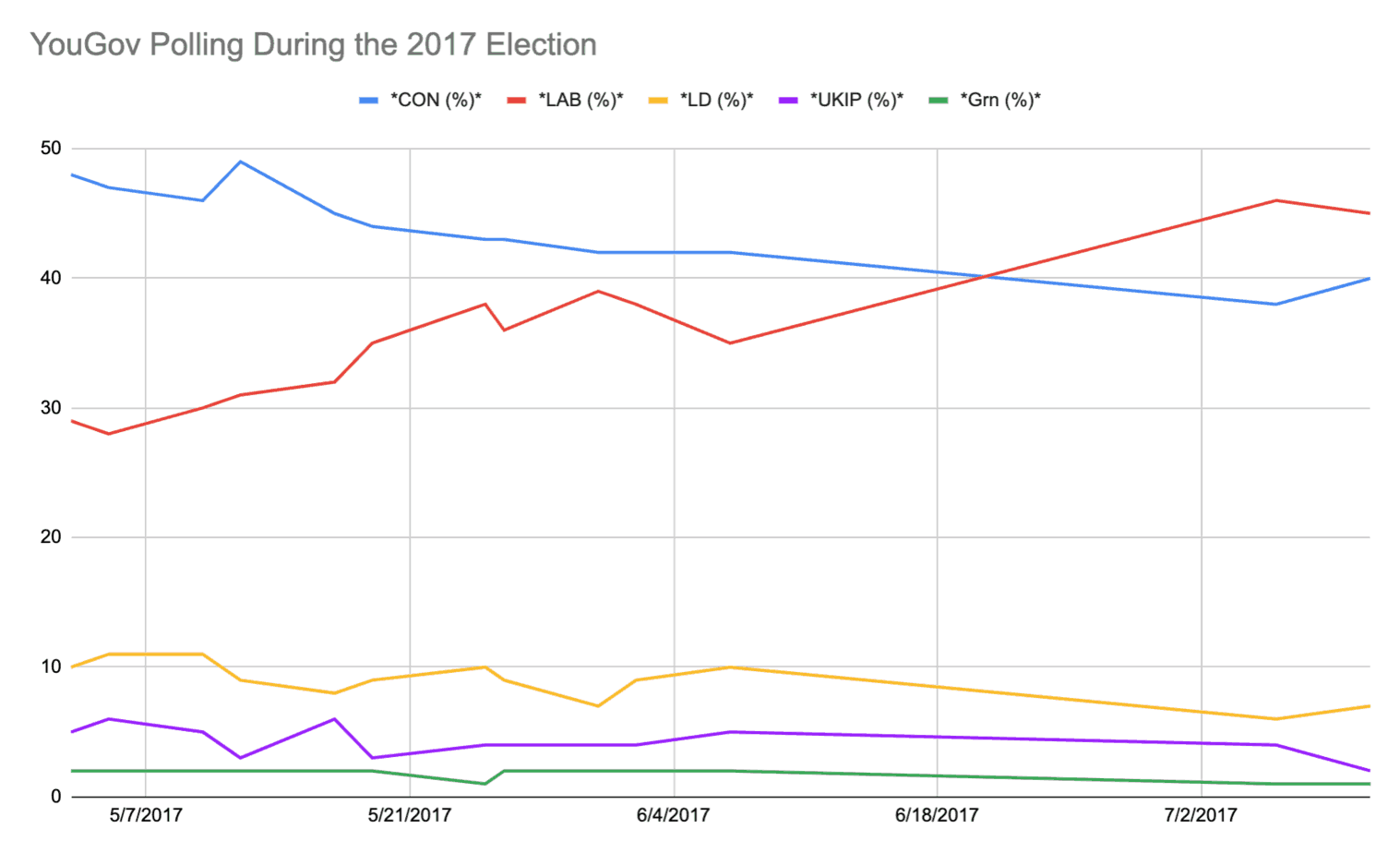 It’s slightly uncomfortable to ask the question, but it could be an important factor in the election: What about the London Bridge attack? Friday’s incident was potentially the sort of black-swan event that could change the dynamics of the election race – and thus the future direction of our country. So understanding how it might shift the race around is a legitimately important thing to do.

At the time of writing, there isn’t much empirical evidence to point towards. The most recent set of polls came out yesterday and show a mixed picture. Crucially, most of the fieldwork for the polls took place on the days before the attack – meaning that the opinions mostly reflect the views of people before it happened.

We can also, unfortunately, compare fairly directly with other attacks. The 2017 election campaign was disrupted by two attacks: The Manchester Arena bombing, and the first London Bridge attack. The YouGov polling over the course of the 2017 campaign is plotted on the above chart – the attacks occurred on the 22nd May and the 3rd June respectively.

By simply looking at the chart then, we can see the lack of any obvious impact: The long-term trend of the Conservative decline and Labour improvement began before the Manchester attack – let alone London Bridge. One thing that did change was that terrorism shot up the list of things voters care about – but clearly the reaction of both Theresa May and Jeremy Corbyn and their parties didn’t do anything to significantly change a race that was dominated by both Brexit and the “dementia tax”.

So what might happen this time? I’ll be very surprised if the attack changes much. Frankly – and most crassly – the attack simply wasn’t that big. The Manchester attack killed 23 people and the London Bridge attack 11. Mercifully this time around, only two people were killed – and and the broader narrative around the attack is celebrating the heroic actions of the civilians who intervened to stop the terrorist.

I would also be surprised if the political response changes much: Boris Johnson and Jeremy Corbyn are already well known to the electorate, having been the faces of the Leave campaign the Labour Party in the 2017 election respectively. In other words: Unlike in 2017, many voters will already have made up their mind on both of them. This means that whatever they might do or say – whether it is Boris saying something particularly illiberal about rehabilitating prisoners, or Jeremy saying something that isn’t sufficiently tough, is likely to already be baked into people’s assessments of their characters.

So will the attack really change anything? Obviously we’ll have to wait and see what happens to the polling – but at this point, given the evidence available, I’ll be very surprised if it does.