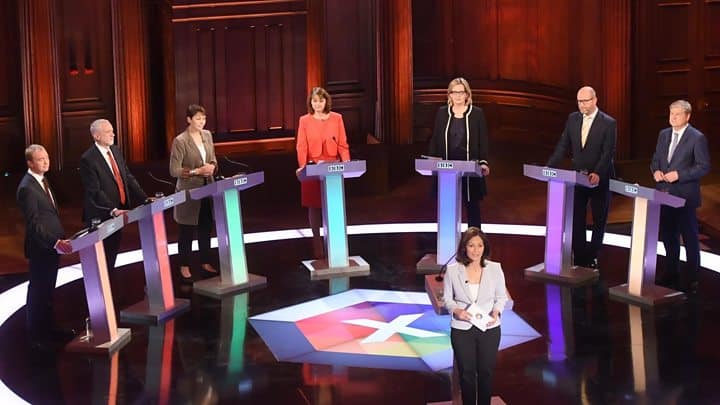 Ask political commentators and they’ll tell you that tonight is set to be one of the biggest moments in the 2019 election campaign. At 8pm Boris Johnson and Jeremy Corbyn go head-to-head on ITV, in the first election debate.

This is a moment when, in theory, undecided voters may tune into politics for the first time in a while, and so could have a profound impact on the race.

There’s precedent for this assumption. Remember the first ever British election debate, in 2010? That head to head saw unexpected success for Nick Clegg. His unknown face and unique schtick was a breath of fresh air, as by that point, David Cameron had been Leader of the Opposition and a regular face on TV for five years, and Gordon Brown had been a fixture in British politics since time immemorial. After the debate “I agree with Nick” briefly became the catchphrase du jour.

Similarly, the 2017 debates were viewed as impactful as they exacerbated Theresa May’s problems during the campaign, which ultimately cost her a majority. Jeremy Corbyn was able to present himself for the first time as a similarly fresh face to Nick Clegg. Theresa May, by contrast, was a known quantity by the electorate. For one of the debates, she inexplicably sent Amber Rudd in her place to debate the six opposition leaders – so looked like a chicken.

The 2015 debates show more mixed evidence of impact. There were two main debates: One between the seven major party leaders, and then a second leaders debate held two weeks later. Interestingly, then Prime Minister David Cameron declined to take part in the second – and reportedly blocked then LibDem leader Nick Clegg from appearing too, as at the time they were in coalition together. There was also a special Question Time that saw both Cameron and Labour Leader Ed Miliband questioned by an audience for an hour, one after another – though not debating together.

Curiously though, given the result of the election – a Tory majority following a Tory lead for most of the campaign – its hard to gauge whether the debates made an impact. Arguably they provided a boost for the smaller parties – perhaps at the expense of Ed Miliband. The Greens, for example, were able to out-flank him from the left and win their highest ever vote share of 3.8%. Unfortunately for Labour, the result could have been so different if a tiny proportion of Green voters had decided to vote for Labour.

So could tonight prove similarly pivotal to the outcome of the election?

Maybe. But I am sceptical. The problem with this debate compared to previous elections is… who are the mysterious undecided voters? Who hasn’t been paying attention to politics? Who doesn’t already have strong opinions – whether positive or negative – about Boris Johnson and Jeremy Corbyn? Previous elections suggest that debates can, in theory, change minds – but are there any minds left to change this time around?