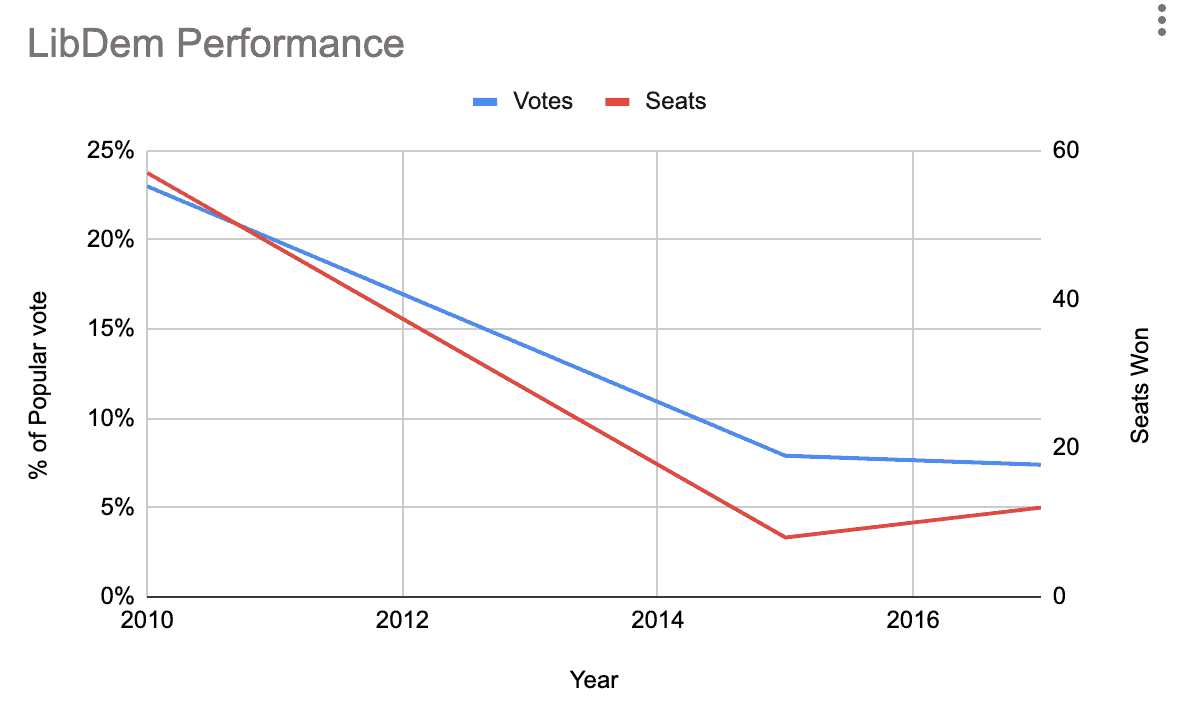 Forecasting British politics is really hard, which makes it incredibly annoying if you’re trying to wager on the outcome.

What makes it particularly vexing is the First Past The Post (FPTP) electoral system: Instead of trying to predict what a group of 60m people might do, you’re trying to predict the winner of 650 separate electoral contests. These contests are both linked to national factors, but are also completely independent. And the contests are small enough that local factors – whether it is the closure of a hospital or a particularly awful local candidate – could play a decisive role in the outcome.

It’s very likely that on election night, we’ll have seats going from Labour to the Tories and from the Tories to Labour, owing to the shifting political undercurrents, not to mention gains and losses for all of the other parties too.

Perhaps the strangest example of FPTP as its worst is the story of the Liberal Democrats.

So what can we expect in 2019? This time around, if the new YouGov MRP poll is accurate, the party can expect to virtually double its vote share from 7.9% to 14% of all votes.. but at the same time, will win just one new seat.

So the narrative and functional outcome for the Liberal Democrats will be that the party has had a disappointing night – even though in the last two years it is has objectively increased its support significantly.

Unsurprisingly then, that’s why every Liberal Democrat I know is in favour of electoral reform – though I still can’t explain why they’re all into Doctor Who.

In any case, the warping effects of FPTP are not a LibDem-only phenomenon. One of the storylines to come out of the YouGov MRP is the successful Tory assault on Labour’s so-called “Red Wall”. The idea is that by just increasing its vote by a few percentage point, the Tories look set to suddenly win themselves dozens of extra seats, completely disproportionate to their games. So given the stakes of this election specifically, perhaps in the future it could be time to reflect on whether FPTP is really the system we want to use.